Open discussion on how you have been getting on the air.

New Member introduction - Steve Ujvarosy previously WA9GZO. Formerly from the West Allis area, studying to pass his license exam in February and interested in 2m operating to get back into things. 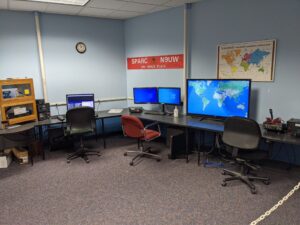 Nicholas's HF radio died, he is going to work with Sam to borrow one indefinitely.

Passed exams: 3 Technician and 4 General
Next session on February 4th at Space Place

Ron K2VB is stepping down as VE Liaison, if interested in filling this role please contact Sam at KC9NG@arrl.net, Ron or Frederick

Winter Field Day is coming up and we encourage at-home participation, listing FLARC as your affiliation

Sam recommended for ballots to be returned by midnight Saturday

Ted K9IMM nominated for President by Nicholas KB9SKW, Ted was not present to accept

It was generally determined that not enough membership was present to continue nominations.

Jeff KC9UNZ moved to proceed with election of Treasurer and Board Members at Large with other officer elections to occur after the February meeting where nominations can continue.  Seconded by Nicholas KB9SKW

Discussion on what “Saturday midnight” means. Jeff moves to close voting at 11:59 pm on Saturday. Seconded by Thomas AB1YW, passed.